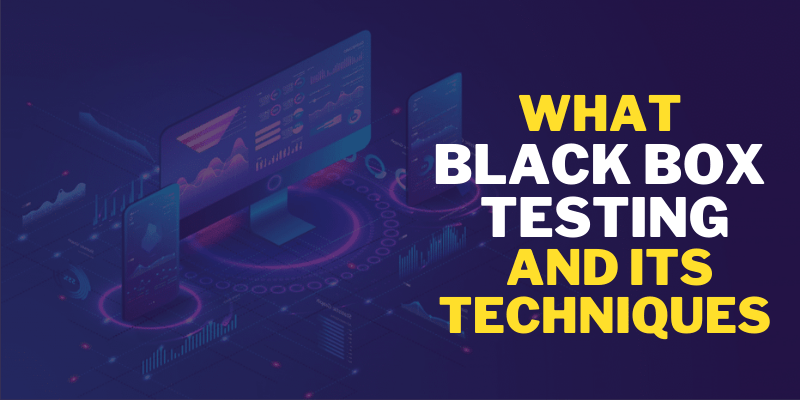 What Black Box Testing And Its Techniques

What is Software Testing?

The process of detecting flaws in a developed product is called software testing. Additionally, it helps in the detection of flaws, gaps, and missing requirements by determining whether the actual findings can be reconciled with the anticipated outcomes.

The final step before a product is introduced to the market is testing. It involves looking at, analysing, observing, and rating several features of a product. Here in this blog, we will discuss black box testing techniques, and to learn more about the testing types, join Software Testing Course in Chennai.

What is Black Box Testing?

Black box testing is a kind of software testing that looks only at the software’s functionality without looking at its coding or internal structure. A customer-stated requirement definition serves as the main source for black-box testing.

In this method, the tester chooses a function, provides an input value to verify its operation, and determines whether or not the component is producing the desired results. The process either passes or fails testing if the desired output is produced. The test team reviews the findings with the development team before moving on to the next component. If there are any serious issues after all functionalities have been tested, they are returned to the development team for fixing.

Several input configurations and the corresponding system behaviour are tabulated using a systematic approach called the decision table technique. It is suitable for functions that have a logical connection between two or more inputs.

Boundary values are those that contain the upper and lower limits of a variable, and they are tested using the boundary value technique. While entering a boundary value, it checks to see if the software is generating the intended results.

State Transition Technique:  This applies to programmes that limit the number of times a user can access the programme.

All discrete combinations of values may be tested using the all-pair testing technique. This combinational approach is used to test applications that incorporate input from checkboxes, radio buttons, list boxes, text boxes, etc.

Cause-Effect Technique highlights the connection between a particular result and all of the elements influencing the result. It is founded on a number of conditions.

The equivalence partitioning technique separates input data into portions with valid and invalid values, and each sector is required to behave identically.

There is no set way to detect the error when using this technique. It is based on the test analyst’s expertise, and the tester uses that experience to infer the software’s troublesome areas.

The use case technique identifies test cases from the system’s inception to end according to how the system is operated. Using this method, the testing team develops a test scenario that can put the entire piece of software through its paces based on how well each function works from beginning to end.

So far we have discussed what black box testing and its techniques and to know more about the Testing types and System Testing, join Software Testing Course in Coimbatore.

No comments to show.